My friend Tommy owns a small coffee shop near a college campus in Shanghai. As I was in his shop the other day, I noticed he hired a few more newbies this month.

He explained, “They are college students who will graduate this month. They are here working for free for a month and I will sign the employment agreement with them in return,” his shop is legally registered. He continued, “and then they can get the graduate certificate without being pushed from school. After that, we will cancel the contract and they can take time to find the job they actually expect.” 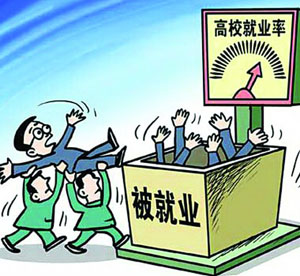 Doesn’t that sound ridiculous? I am not sure if it’s true but I did read a lot of posts on Sina Weibo (Chinese version of Twitter) complaining about it: college graduates are said to have found jobs. Some colleges, according to netizens, won’t give students graduate certificates or degree certificates if they fail to sign the employment agreement with the third party which can be a company or any organization that can offer employee a legal contract.

On June 9th, China’s college students’ employment report released that in 2010, the overall employment rate of college graduates is nearly 89.6 percent, which means employment has rebounded from level it was at during the world economic crisis.

The high rate seems doubtful since the students are helpless about the “being employed”. Some journalists saw this and did some investigate. Almost none of the school admitted it as they argued that students misunderstood their concerns. They initiated such rules only to urge students to find a job. In another word, it’s just a scarce tactic.

Ironically enough, one day later on the 10th, Ministry of Education issued that colleges are forbidden linking graduate certificate with employment contract. Universities are required to inspect employment information carefully and must not make false report. The “being employment” shall not be occurred under the management of related departments.

I remember the employment rate that my college published of my year was 97 percent which was pretty high. Sadly, I was the 3% as I decided to be a freelancer. I had a great job but no third party could sign a legal contract with me, thus, I couldn’t make contribution to the employment rate of my school. I did feel pressure from school because they were calling me very month to check out my job status even after I graduated. They offered me a few employment opportunities and felt very disappointed when I turned them down.

Actually the whole “being employed” thing is not new. It was disclosed a couple of years ago but it has become increasingly serious thanks to Weibo and all kinds of SNS. College students are complaining about their schools online and more and more people are aware of this. University’s image has been damaged. Many graduates exclaimed that employment rate is more like a number game.

It goes without saying that in recent years, the situation of graduates’ employment is becoming increasingly grim throughout China, which has brought great pressure on students, colleges, society and government. Employment serves as the fundamental prerequisite and basic approach for people to improve their life. As a result, local government has implemented policies to get over employment difficulty. However, some colleges are playing the games with employment rate and trying to cover the truth by faking the high rate. For some second-tier and private colleges, high employment rate could attract more students and that’s the very reason why they press students to sign the agreements.

University is a place where we learn knowledge and learn to be man. As the temple of knowledge, if it is guiding students to lose integrity, what is the essence of education? If the students have to experience “being employed” before they finish school, I say, that’s a sad thing for China’s education.