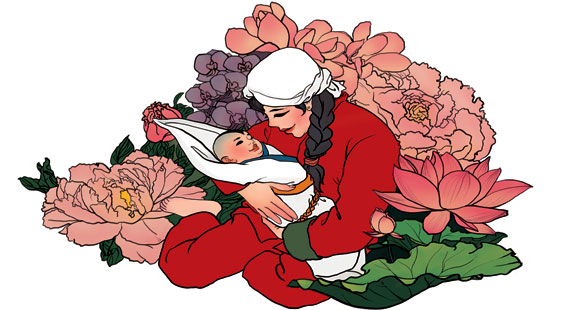 After Mother’s Day, it is still a hot topic on China’s social media: how could Kate Middleton appear in public, high heels and all, only 10 hours after giving birth? In China, new moms are confined to their beds for weeks after giving birth. This tradition, called ‘sitting the month’, comes with many rules. Amongst them: no showering, no drinking cold water, no leaving the house.

Just like a lot of countries in the world, China celebrated Mother’s Day last weekend, on the second Sunday in May. While the whole nation was preoccupied with buying mum’s gifts, one online picture was still passionately discussed on Sina Weibo: the photo of The Duchess of Cambridge, Kate Middleton, leaving the hospital and showing up in public looking pretty and rested, only ten hour after giving birth to Princess Charlotte.

According to Chinese tradition, women are expected to rest indoors for a full month after giving birth, which is called “sitting the month” or “zuo yuezi” (坐月子) in Chinese.

“Zuo yuezi” can be dated back to Western Han Dynasty (B.C. 202 – A.D.9) and was even mentioned in the 2,000-year-old Book of Changes, or I-Ching (易经). After giving birth, tradition keeps a new mother indoors for the month after the baby is born. The new mother is treated like a queen – waited on hand and foot. She doesn’t need to do anything; not taking care of the baby nor cooking for the family. Every year, millions of Chinese women submit to this practice. Women generally see it as a gift as well as a torture.

No taking showers, no brushing teeth.

During the traditional confinement period, new mothers sit around in pajamas for a month to recover from childbirth. There are a lot of rules, which many new moms are struggling with: no going outside, no stairs, no lifting, no cold drinks, no open windows, no air conditioning in summer or winter, and, inconveniently, no taking showers or brushing teeth. Even when breastfeeding, women lie on their sides instead of holding the baby.

From generation to generation, Chinese women are told if they do not undergo this confinement, they will suffer from health problems later in life. Therefore, Chinese netizens were shocked by Kate’s public appearance in her fancy high heels just ten hours after her delivery.

One user called “Potty-mouthed Queen” posted on Sina Weibo: “I felt extremely weak and tired after I gave birth to my daughter. There’s no way I could stand and show up like Kate after 10 hours.”

Kate’s public display led to the reflection of Chinese tradition in modern society. Another user, “Lemon”, said: “I’ve been staying in bed for 10 days already and I really hate it. I can’t brush my teeth or take a shower. I’m not allowed to eat raw fruit or vegetables, or drink coffee, cold drinks or even cold water. I understand that these rules are aimed at restoring balance to the new mother’s body after childbirth, but I’ve had enough.”

“Comparing Western women with Chinese women is like comparing apples with oranges”.

Most Chinese still believe that women following the tradition of ‘sitting the month’ later will have less health problems than those who don’t. In addition, Chinese traditions still play an integral role in everyday life, as people tend to respect them and pass them on to their children: “It must make sense since the tradition has passed generation to generation,” said many users on Weibo.

Other netizens pointed out physical differences between Chinese and westerners. “It’s like comparing apples with oranges. We shouldn’t follow what western mothers do as the diet habits and geographical environments are different“, user Zhang Daidai commented on Weibo. According to her, Caucasian women eat a lot of beef and high protein food, making it unnecessary for them to ‘sit’ the month after delivering the baby. However, the user points out, they put on weight easier than most Chinese: “It’s all about the diet habits. Westerners already have more than enough calcium and protein in their body, thus, the loss of calcium and protein during labour doesn’t really affect them. On the contrary, Chinese women generally miss these nutriments in a great amount, so it’s better to endure it for a month and avoid serious health problems in the future.”

The practice of ‘sitting the month’ related to existing ideas about balancing yin and yang. If the yin and yang are balanced in the body, one will not get sick. If they are out of balance, people tend to get ill more easily.

In spite of all the arguments online, the benefits of ‘sitting the month’ are evident for many Chinese women. As one of the new mothers shared: “I was totally against the idea of confinement in childbirth. But after 30 days, I did feel like it helped me recover and the constant headache which always bothered me before delivery is now gone.”

Despite the rapid speed of China’s modernization, the long-history practice of ‘sitting the month’ remains popular and treasured. Although the radiant post delivery Kate Middleton fascinated Chinese netizens, it is unlikely that Chinese new mums will step out in their high heels after giving birth any time soon.

This article was published on What’s on Weibo.