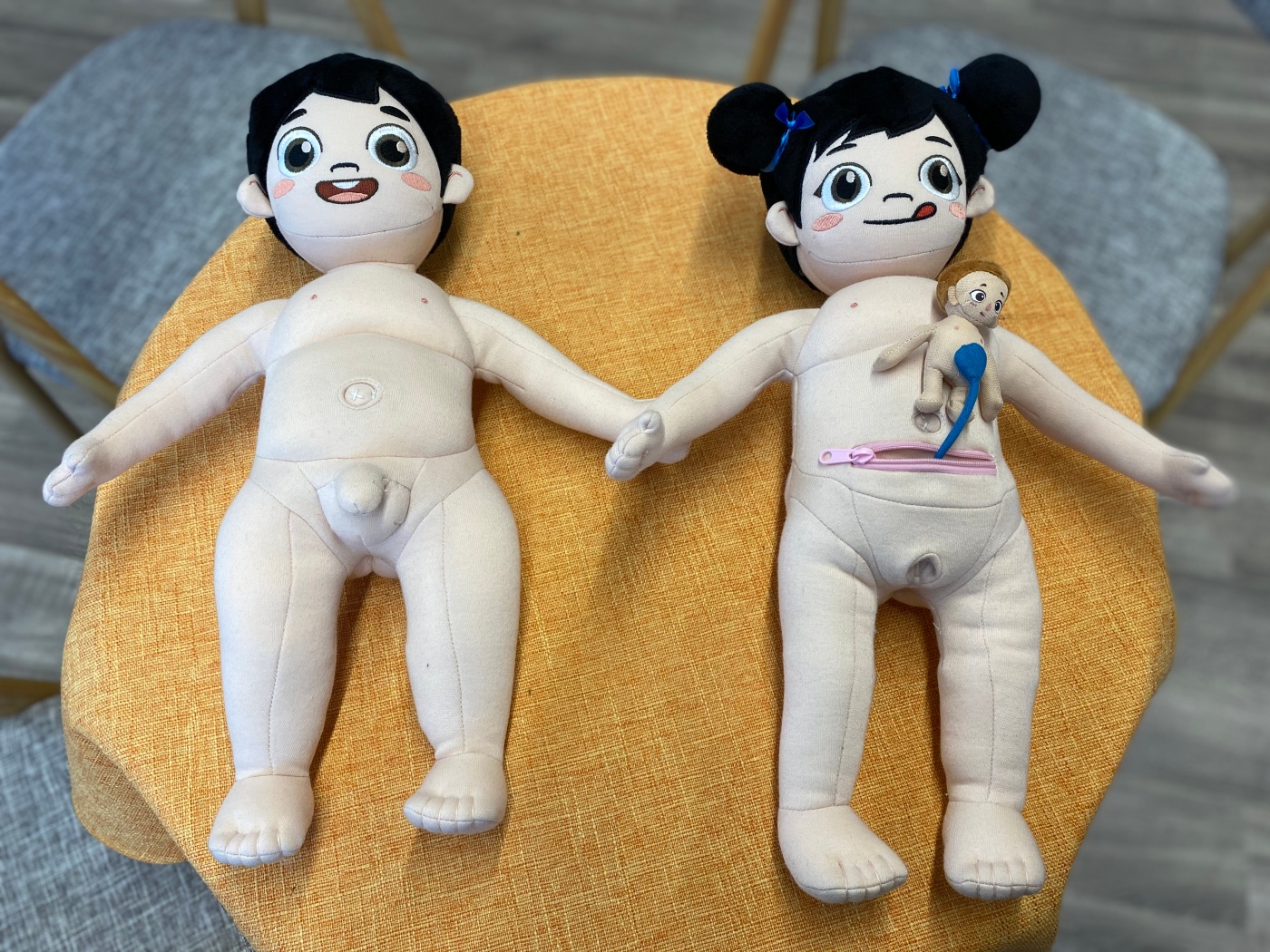 SHANGHAI — A crowd of curious adults watched as Chen Jing unzipped the pink cicatrix across the belly of a plush doll made to look like a girl. As she opened an abdominal compartment, a tuft of brown hair poked through. Chen carefully removed the “newborn” from the mother doll, its umbilical cord still attached.

“This is how you can explain to your children where babies come from if you’re too embarrassed to demonstrate with your own body,” she said.

It was Wednesday, and dozens of adults had gathered at a local school to attend a sex education class for parents of kindergarteners. The stars of the show: a pair of anatomically detailed dolls being touted as visual aids.

There was the boy doll with yellow shorts, clearly marked nipples and belly button, curved buttocks, and protruding penis and testicles. The girl doll, meanwhile, wore a matching blue top and skirt. Apart from the zipper across her stomach, meant to mimic a C-section delivery, there was a hole between her legs to represent her vagina. The smaller baby doll could pass through this artificial birth canal to demonstrate a natural delivery.

“One of the most difficult questions Chinese parents face is, ‘Where do I come from?’” said Chen, the founder of Evolving-I, a Shanghai-based organization that has been offering free and paid sex education courses to parents and their children since 2015.

Instead of giving biologically accurate “birds and the bees” talks, many Chinese parents dismissively tell their kids they were rescued from a river, fetched from a dumpster, or received as gifts.

“All of these answers set a bad example for children,” Chen told Sixth Tone.

A parent attending the class told Sixth Tone a few years ago, she had explained to her then-3-year-old son that he had come from her belly. “But two years later, he suddenly asked me why I didn’t have a scar on my stomach. Then when I showed him an illustrated book, he said he wanted to see the real thing,” she said. “But there’s no way I was going to show him my private parts.”

Wednesday’s sex education course for parents of children aged up to 6 is sponsored by the Shanghai branch of the All-China Women’s Federation, the country’s state-backed women’s rights organization. Before the event, Chen’s team reached out to designers from China and Malaysia to conceive the pair of dolls, which Chen calls the first such concept in the country.

“Many sex education courses tell you where and how children are born, but there’s no way to scientifically show them the process of a baby being ‘born’ from the mother’s belly or birth canal,” Chen said. “The dolls can help parents talk about sex in a way that’s interesting and acceptable to their children.”

Tao Jianli, a sex education teacher in the eastern Zhejiang province, agrees with this premise. “They (the dolls) can help children understand the reproduction process more intuitively,” said Tao, who is not affiliated with Evolving-I. “The dolls’ expressions look friendly, so they probably won’t scare the children.”

Though Chen’s team specifically chose to make the zipper along the girl doll’s stomach a fleshy pink color, Tao said a red zipper to symbolize blood might have provided a better learning opportunity. “We can tell the children that there’s a lot of blood during childbirth, and that life should be cherished because it doesn’t come easy,” she said.

The doll pair will be used in future Evolving-I courses, and parents and schools will be able to purchase them online beginning next month. Chen said her team also plans to make a few design improvements, such as adding elastic to the girl doll’s vagina.

While Tao approves of the use of visual aids to teach sex education, she said instructors should also be sure to explain some essential context. “The dolls look like children,” Tao said, “so the teacher should clarify to the class that only adults who can bear responsibility for their decisions should have babies.”

Over the past six years, Chen has taught more than 1,000 sex education classes in China. “In the beginning, it was like walking through a desert,” she said. “No one attended, and there were few supportive parents.” But with new cases of child sex abuse coming to light each year, parents have grown more aware of the importance of sex education, Chen said.

Although more and more forward-thinking teachers have started working with nonprofits to promote sex education programs, the subject remains poorly taught in China. As a result, some parents are turning to extracurricular workshops to give their children a more comprehensive understanding of sex and sexuality.

According to Chen, there shouldn’t be a need for the work she does, because schools should be responsible for teaching sex education to children. But schools are under pressure too, she admits.

“If there’s even one parent who doesn’t support sex education, it’s very difficult to introduce these courses at schools,” Chen said. In 2017, when a school in Hangzhou, Zhejiang’s relatively cosmopolitan provincial capital, tried to introduce a sex education curriculum, some parents objected, arguing that 7-year-olds were too young to be learning about intercourse, gender equality, and sexual orientation.

“Therefore, parents are key,” Chen said. “If they have greater awareness, it’s more likely that their children will, too.”

None of the parents present on Wednesday had experienced a sex education class before. Many raised their hands and said they would often catch their children playing with their private parts. Not knowing how to respond, some parents said they had punished their kids, only to feel guilty afterward.

“Now I know that children as young as 3 are sexually curious,” one mother told Sixth Tone after the class. “I need to upgrade my knowledge of sex education — otherwise it will be difficult for me to help my child.”

This article was published on Sixth Tone.